Vinegar can be a touchy subject for those who practice a gluten free diet. On one hand, most experts consider almost all types of vinegar, including vinegar created from gluten containing grains, to be gluten free. This is made possible by our friend distillation. Basically, the vinegar distillation process breaks down and eliminates gluten from the equation.

However, there are people who are extremely sensitive to trace amounts of gluten that may react to almost all vinegar, including the ones I mentioned in Gluten Free Pantry Primer - Vinegar. The culprit in these cases, may be gluten cross-contamination in the manufacturing facility, or possibly minute gluten contamination from the ingredients used to make the vinegar. 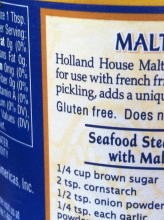 n addition, conventional wisdom has told all of us gluten free folk that one vinegar amongst the many is off limits - Malt Vinegar. And to date, this also means any products that are made with malt vinegar, such as Malt Vinegar and Sea Salt Potato Chips, are also off limits. This premise is primarily based on two important factors:
1. Malt vinegar is made from barley which is a gluten containing grain.
2. Unlike many other types of vinegar, it is not a distilled vinegar and therefore the gluten particles are not removed during the vingar making process.

So, when is it time to challenge conventional wisdom?

Recent research suggests that the process by which malt vinegar is made lowers the gluten levels bit by bit. The initial process of malting breaks down some of the gluten containing protein in barley. Further along in the brewing cycle, mashing and fermentation continue to break down barley's gluten containing proteins. Finally, the fermented vinegar is diluted with water to maintain the proper acidity. so, through degradation and dilution, the end result is that malt vinegar contains very little, or possibly no, gluten.

Just so we are clear, the idea that malt vinegar may be gluten free is recent, possibly controversial and is definitely a personal decision. Do more research for yourself and continue to challenge what is and isn't acceptable in a gluten free diet!

Interesting article and giving those of us with a love of salt and vinegar crisps some hope, but do you know if there is a standard method of production i.e. the number of times it's washed, the dilution factor etc.? Until that can be established as an industry standard then one malt vinegar may be safe while another is not, and I personally don't find that the alternative vinegars have the same depth of body as the malt version. Cheers!