Wine has been an integral part of my diet for over 10 years. Although I am well over 21, it took culinary school to awaken this appreciation in me. Wine is instrumental to my cooking, dinner parties, gift giving and easy going nights with friends. And, it was my go-to beverage when I first began living gluten free.

So, when I first caught wind that wine may not be gluten free I was surprised and more then a bit skeptical. After all, since wine is made from grapes, it should naturally  be gluten free. Not to mention, I had years of wine drinking under my belt without an adverse reaction.

Oh how my mind raced with questions.

1. Are people confusing wine with wine coolers? Possible I suppose since wine coolers are malt beverages, not gluten free and have wine in the name. However, they should never, upon penalty of death, be confused with actual wine!

2. Did this mean I was more tolerant of minute levels of gluten? I doubted that, since one sip of beer made me feel downright crummy (It was early on. I was in denial and wondering if I really, really needed to be gluten free. I am sure you understand.)

3. Is everyone crazy? Also, probably not the answer.

Which left me with the more productive musings about how and when gluten would enter the winemaking process. It seems that gluten has potential to be introduced into wine at two points.

First, some wines are aged in wood barrels. Historically, cooperages have been known to use a small amount of flour paste to seal and smooth the joints on the barrel

heads. Today, this practice is far from common and research indicates that it is more likely to occur in Europe than the US. Before a barrel leaves the cooperage, it is filled with water and rolled to test for leaks. To me, this indicates that even if a gluten based paste was used, this does not dissolve into the liquid contents. Otherwise, the barrel would not be water tight and thus used to age wine.

It is also important to note that a small barrel holds approximately 60 gallons of wine. Even when that wine comes in contact with the paste, research using mass spectrometry found there to be less than 10 parts per million in the finished (bottled) wine. If trace amounts were found, it fell below 5ppm. This is well below the 20ppm threshold for a food to be considered gluten free.

Second, gluten has been listed as a culprit in fining (clarifying) wine. Although this is possible, it is not very probable. It is more likely

that clay, charcoal, egg proteins, milk proteins, shellfish extracts, gelatin, fish bladder extracts known as isinglass (yes that is correct) and other numerous additives all make finer fining agents. I found the following article to be a great quick list of the most common fining agents.

For the most part, it seems that wine is generally considered safe for celiacs to consume and is still listed as a gluten free product on celiac driven websites. However, if you do notice symptoms or are concerned, ask the wine maker if: 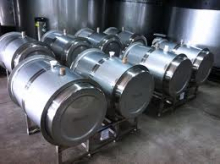 Whatever you choose to drink, raise a glass and enjoy!